Despite The Circus In Washington, Stay Focused On Economic Fundamentals 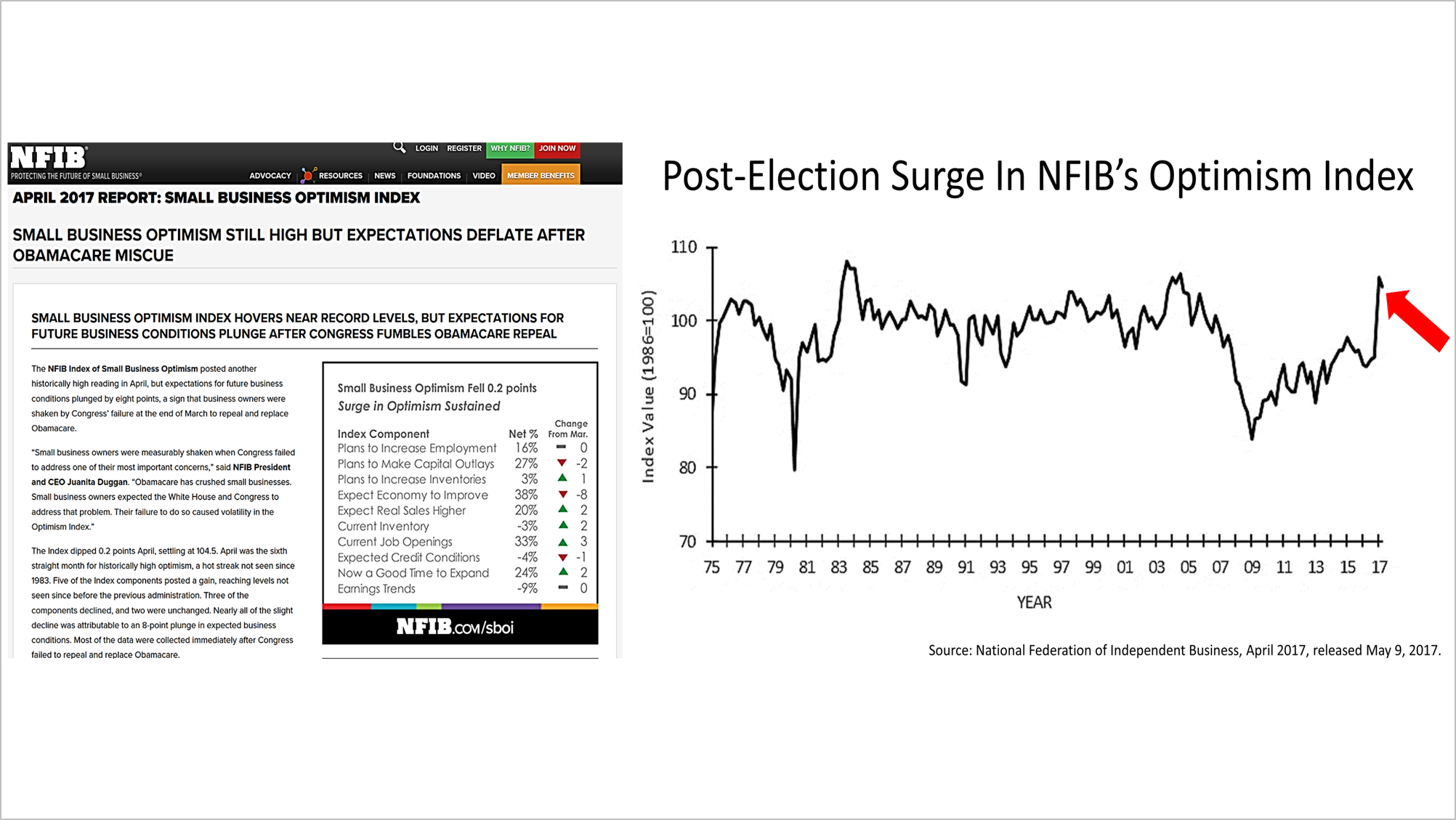 A highlight of the economic news last week was a sharp drop in the optimism index from the National Federation of Independent Businesses.


Expectations for future business conditions plunged by eight points, in what the NFIB said was "a sign that business owners were shaken by Congress' failure at the end of March to repeal and replace Obamacare."

Looking beyond the political rhetoric and past the recent drop, the NFIB Index of Small Business Optimism actually stands for yet another month at a level reached only twice in its 41-year history. 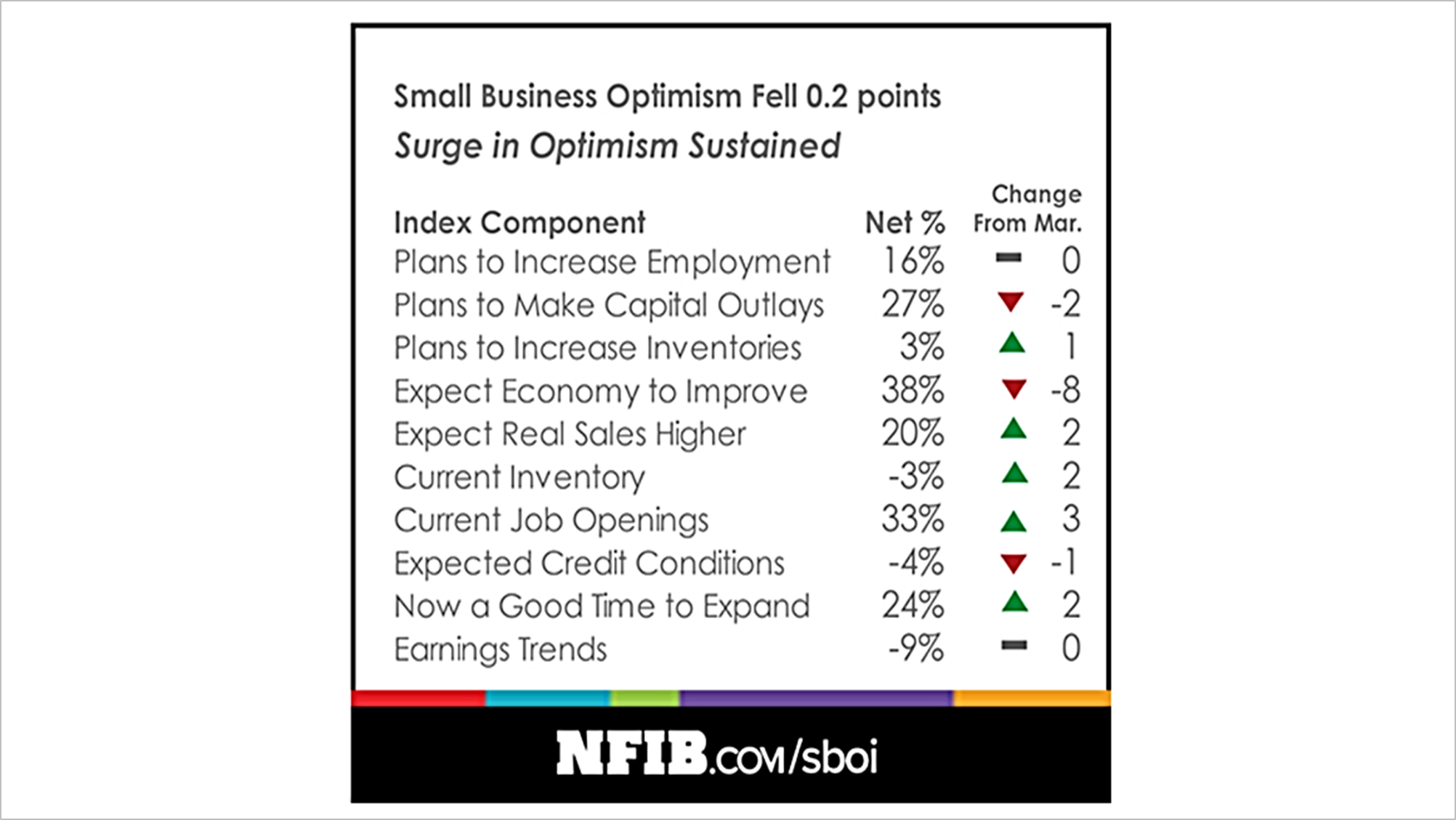 While events in Washington, D.C. are causing a political imbroglio, the economic numbers are what matter most, and the NFIB's Optimism Index stayed at a near record-high level for yet another month. Moreover, the new jobs sub-component of the NFIB Optimism Index boomed by 33% in April. 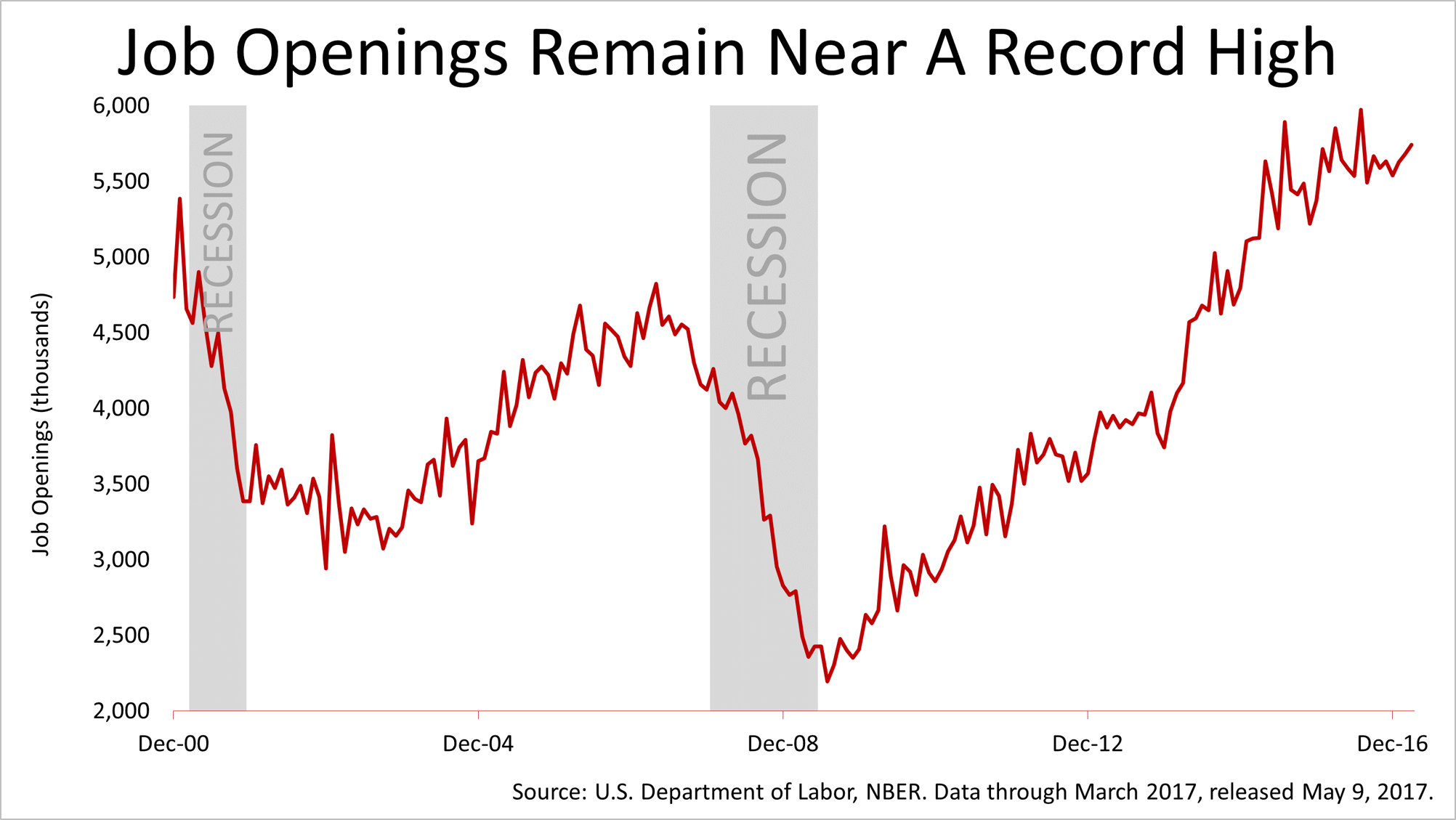 Corroborating the data from the NFIB last week, the Job Openings and Labor Turnover (JOLT) report from the U.S. Bureau of Labor Statistics showed job openings in April remained near a record high. 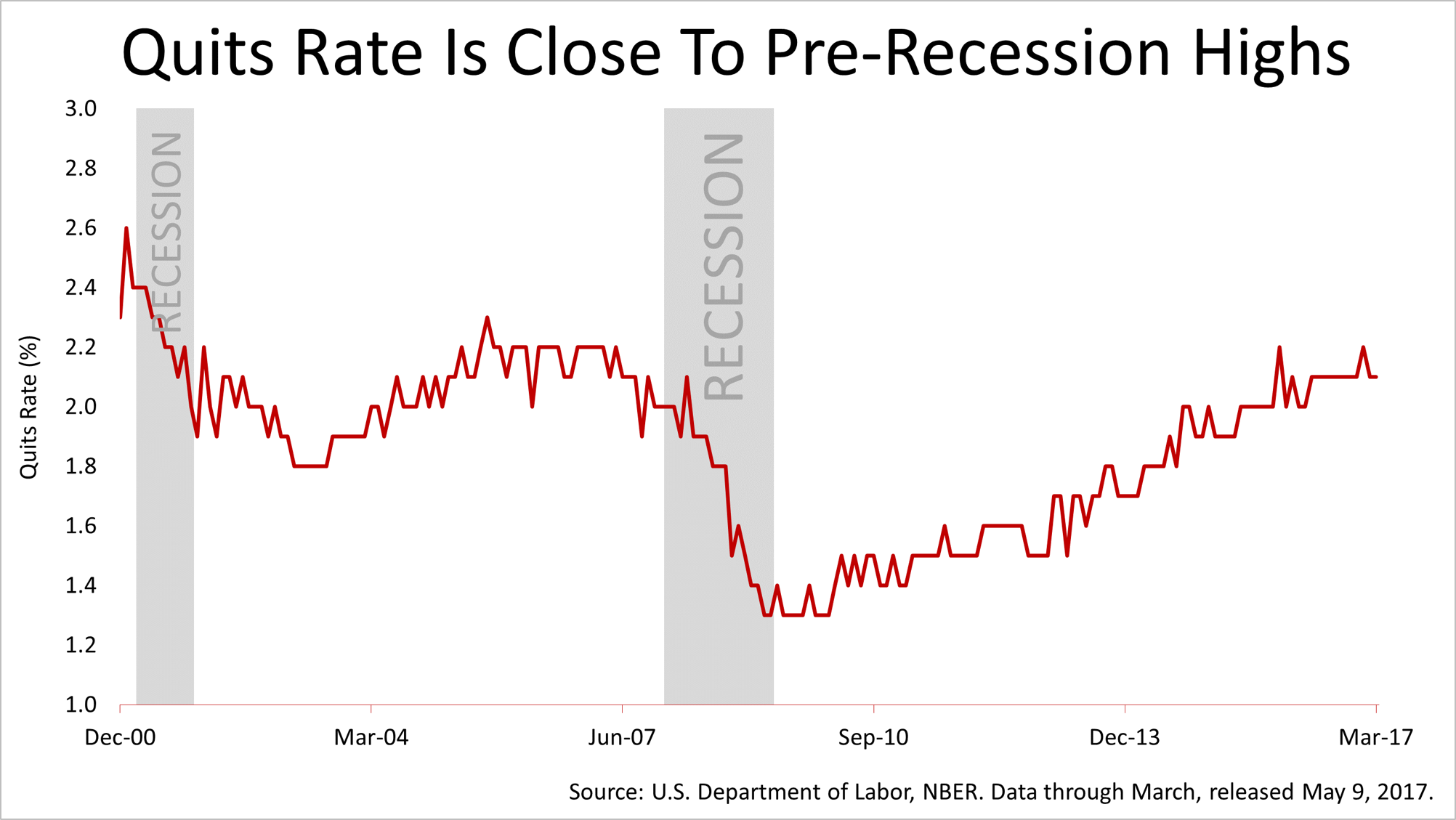 Meanwhile, the quits rate - how willing people are to quit their job - also shows the labor market is tightening. In April, it remained at about as high a level as was reached in the last economic expansion. 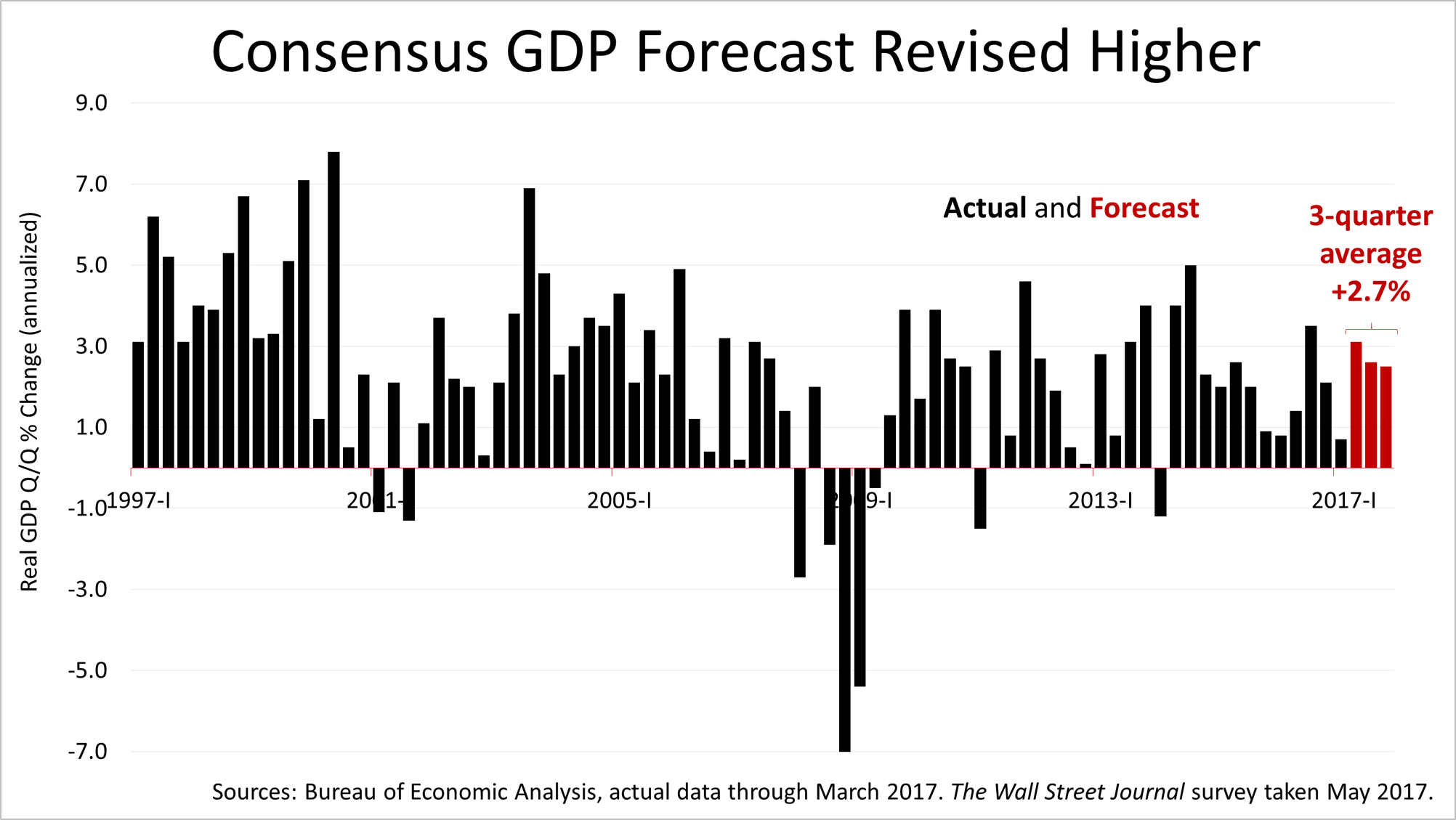 The 59 economists surveyed by The Wall Street Journal said in early May that they expected the average growth rate of the U.S. economy for the last three quarters of the year would average 2.7%. That's up from the 2.6% estimated growth rate from the April survey.

Significantly, the second quarter's estimated growth rate for U.S. gross domestic product (GDP), according to this group of economists, is now 3.1%, up from the 2.8% estimated just a month earlier. Following the weak first quarter report in which the GDP expanded by seven-tenths of 1%, economists expect a strong snap back in the second quarter, ending June 30. 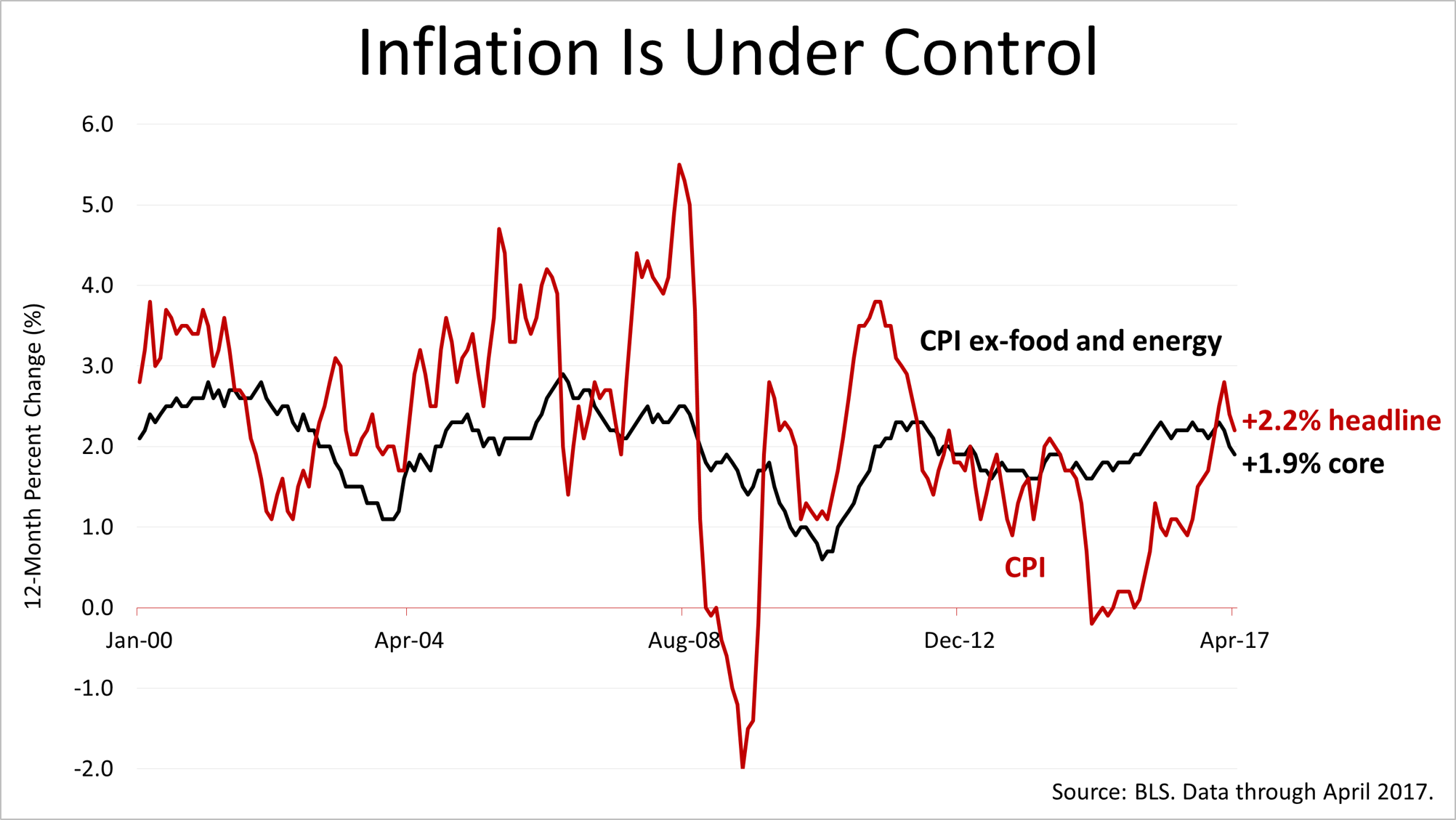 The Consumer Price Index (CPI) was released on Friday and headline inflation plunged to a 2.2% annual rate in April. The CPI had soared in recent months but the Federal Reserve Chair said in public pronouncements that she was not alarmed by this and that U.S. central bankers expected inflation would not continue to rise. She was right. That is reassuring, especially with the credibility of our nation's political leaders being questioned. 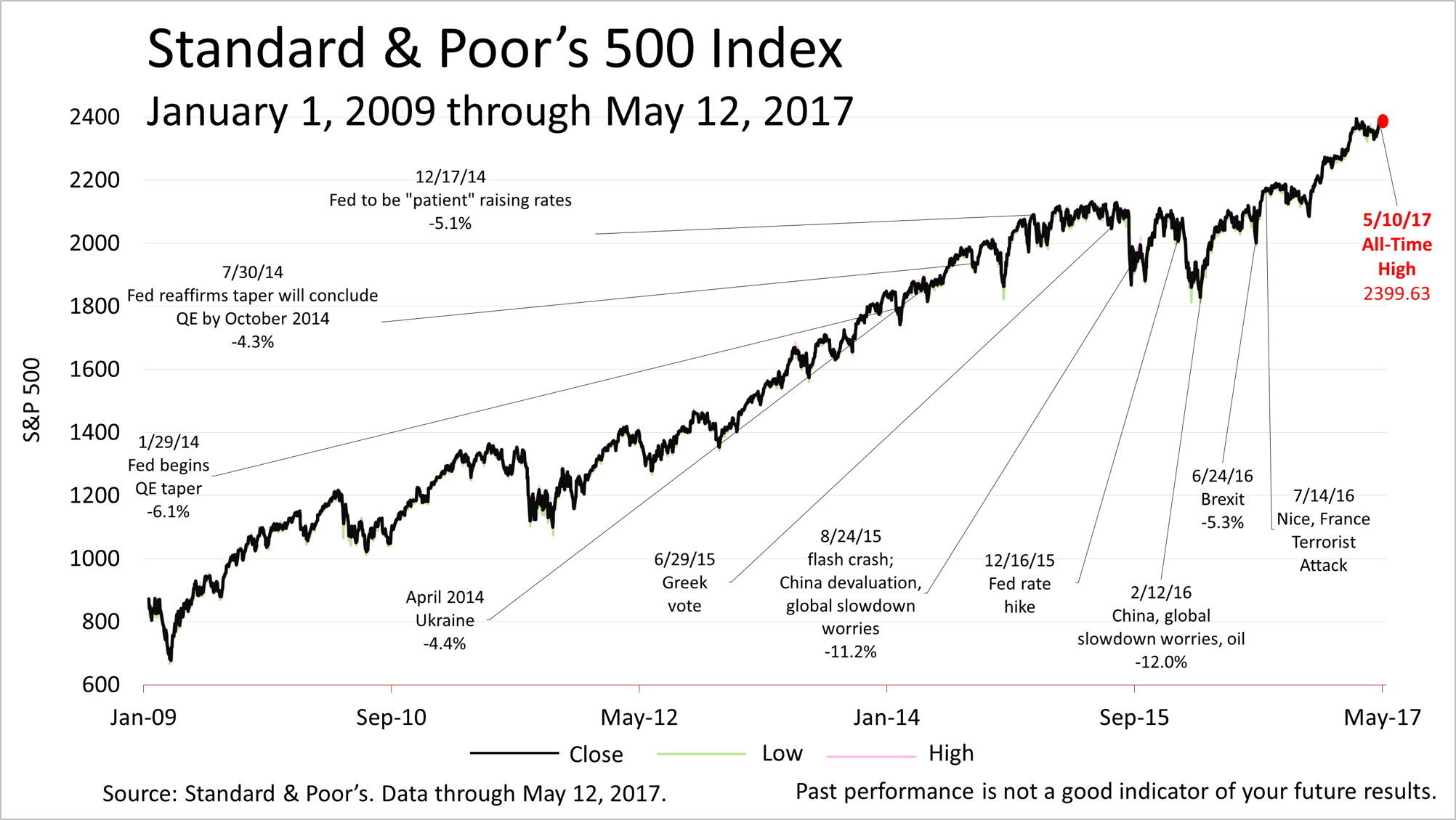 Despite the sideshow in the nation's capital last week, what remains most important to your long-term wealth are always economic fundamentals, which remain very positive. About 85% of companies in the Standard & Poor's 500 stock index have reported their earnings for the first quarter of 2017 and their profits were much stronger than expected, and earnings are what drives stock prices.

For the week, the blue-chip index measuring the price of America's largest publicly-held companies dropped by about a one-third of 1% - its first loss in the last four weeks. Closing at 2,390.90 on Friday, the S&P 500 remained near its all-time high.

The last leg of the stock market's eight-year bull market run occurred after optimism surged over the likelihood of a tax cut following the Republican victory in November's election. Since the election, however, the circus in Washington has increasingly convinced many investors to discount the chances of a tax cut and how big and stimulative it might be, given the government deficit.

Yet Morgan Stanley, one of the nation's largest securities sales firms, said on Friday that the S&P 500 could hit 2,700 over the next 12 months. Of course, no one can predict the next move up or down in stock prices, and antics in Washington could help trigger a correction in stock prices by 10% or 15%. Stay focused on economic fundamentals, despite the distractions.