On The Hunt For Answers About The Future Of The Economy And Stocks? 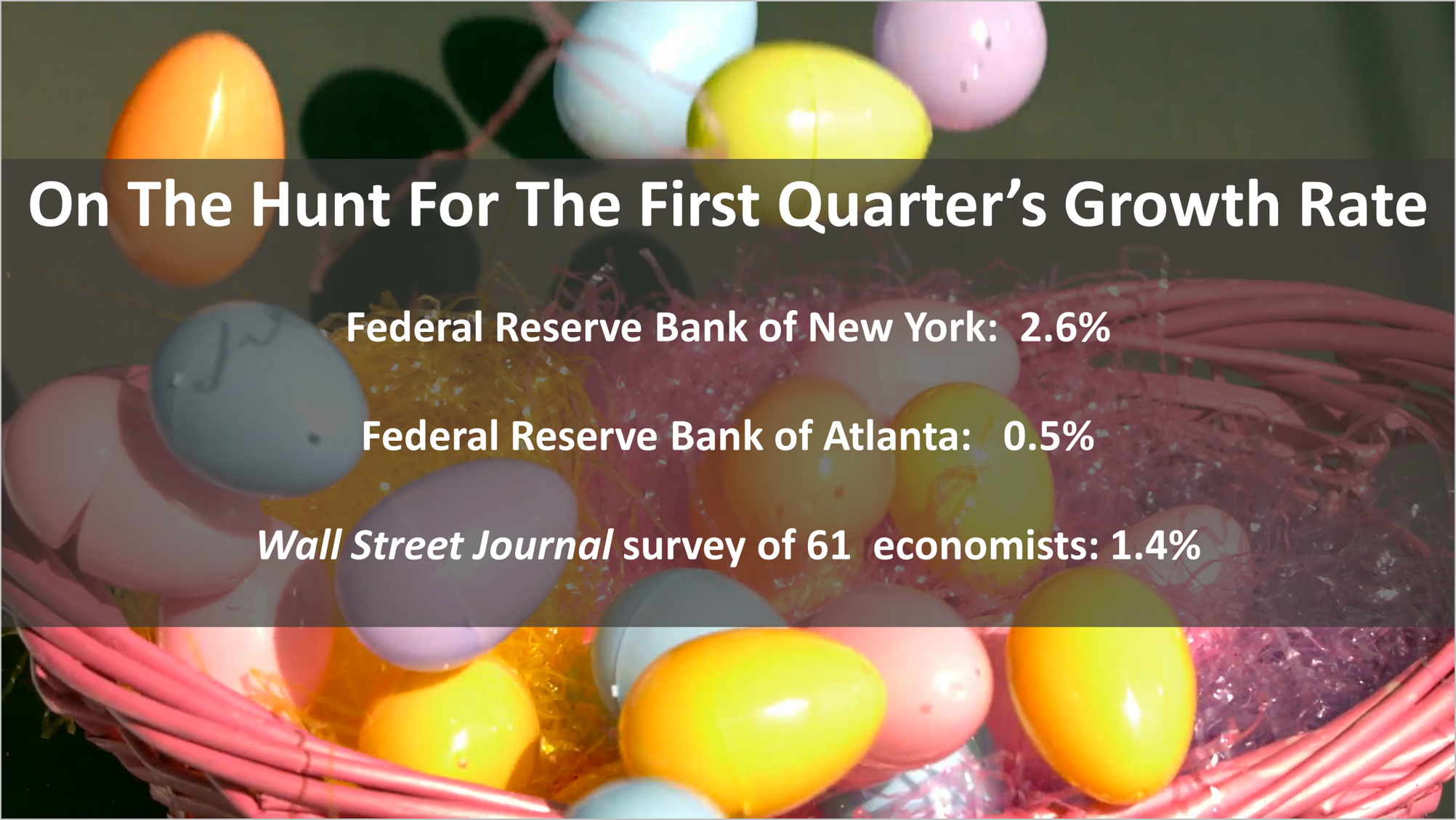 While this is the time of the year for an Easter egg hunt, economists are busy trying to find where economic growth landed in the first quarter.


According to the Federal Reserve Bank of New York's forecast, released Friday, the first quarter growth rate will come in at 2.6%. However, the Fed in Atlanta found growth of .5% in their forecast. In addition, a newly released survey of 61 economists by The Wall Street Journal reportedly said first quarter economic growth will come in at 1.4%.

We won't find out the actual number until the official release at the end of April, but the different answers from three expert sources hints at how difficult it is to forecast economic growth. 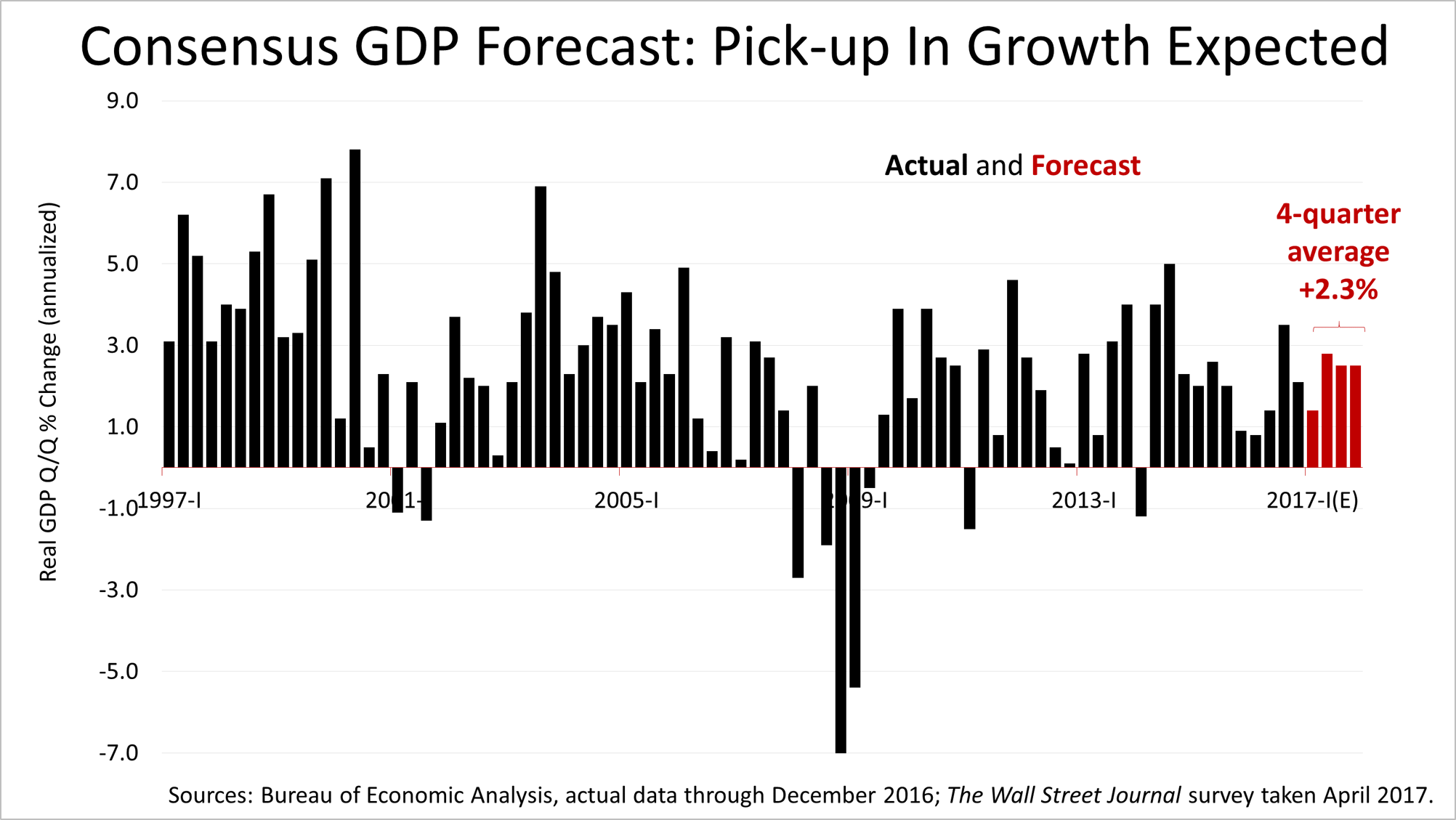 The Wall Street Journal's consensus forecast of 61 economists surveyed in early April called for an average growth rate over the four quarters of 2017 of 2.3%. While that was shaved from their forecast a month ago, that would be fairly robust growth. 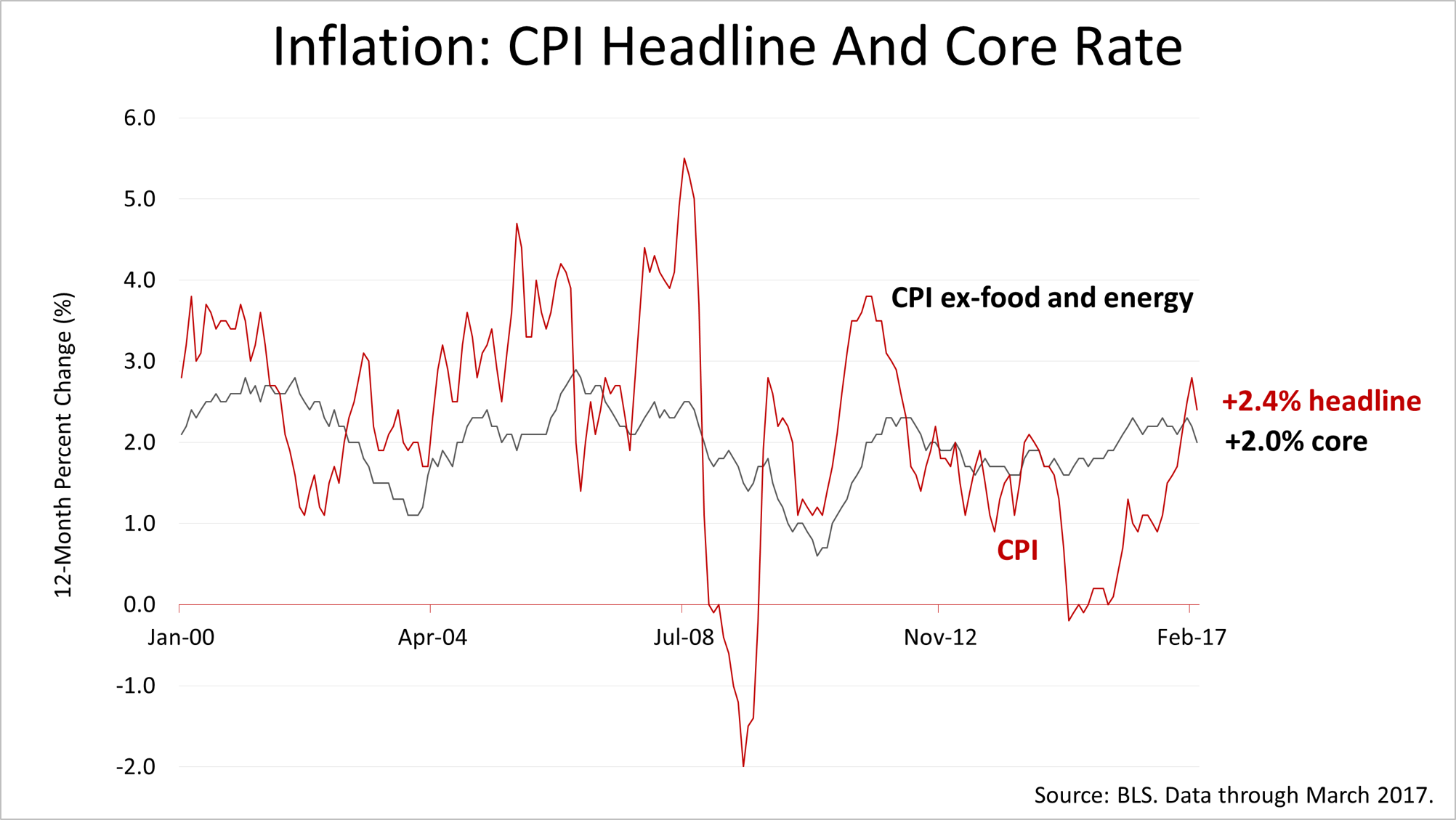 Following a long slow-growth period of expansion and low inflation, the Fed has said interest rates and inflation are back to normal and the U.S. economy has fully recovered from the near-collapse of the world financial system in 2008. Last month's headline inflation rate, which is the rate reported in the financial press, was 2.4%, which was a tick down following a surge a month earlier.

The U.S. Federal Reserve, which sets policy and is responsible for controlling interest rates as well as inflation in the U.S, said in most pronouncements that inflation is under control and that it expects to increase interest rates gradually to keep inflation in check in the months ahead as the economy continues to expand. 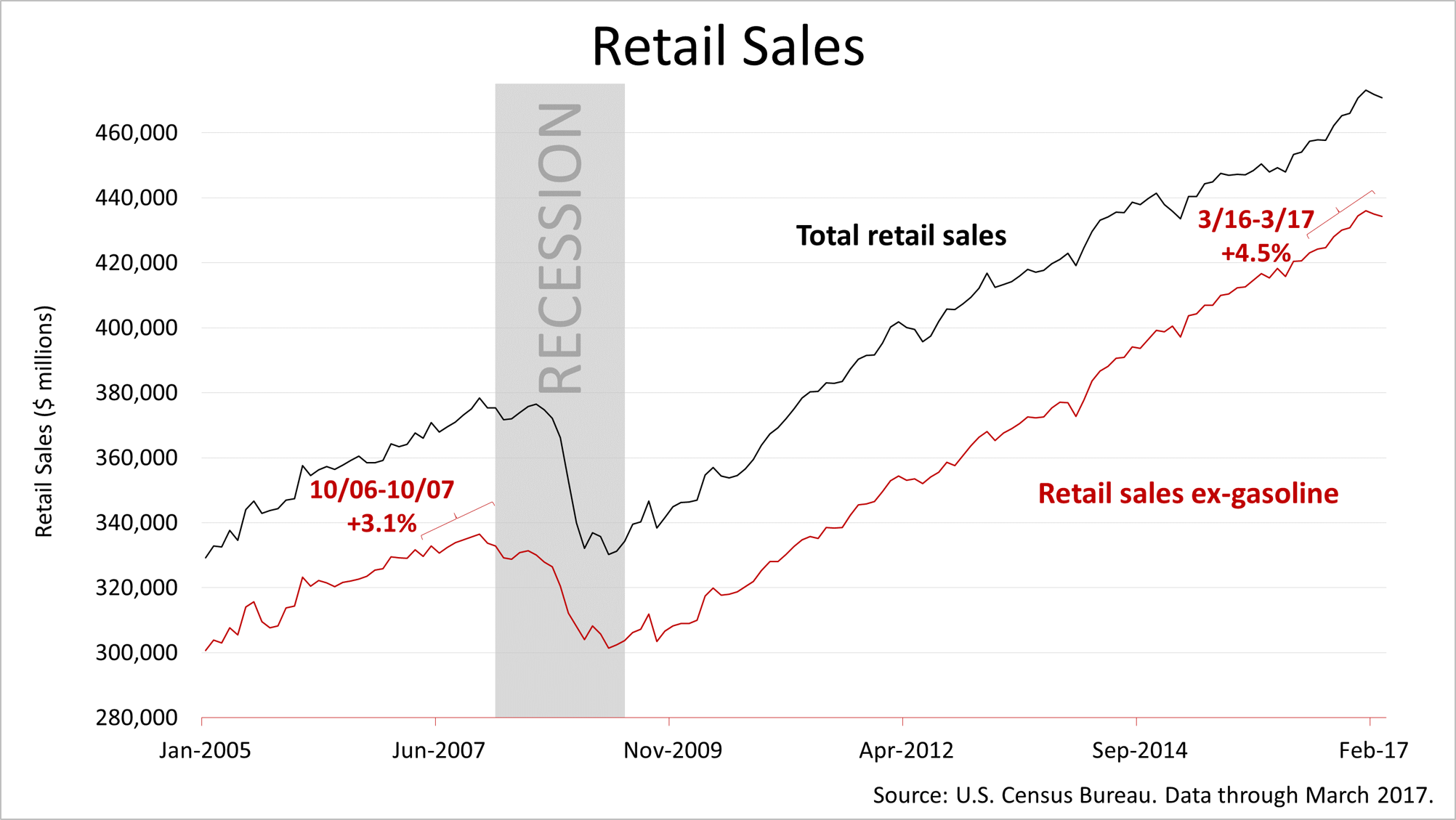 Retail sales figures, released Friday by the Census Bureau, ticked down for the second month in a row, and some in the financial press might report the news as a disappointment. However, the growth rate over the past year in retail sales has actually been booming. The 4.5% growth in retail sales year-over-year is very strong compared with the 3.3% growth rate at the peak of the last economic expansion. 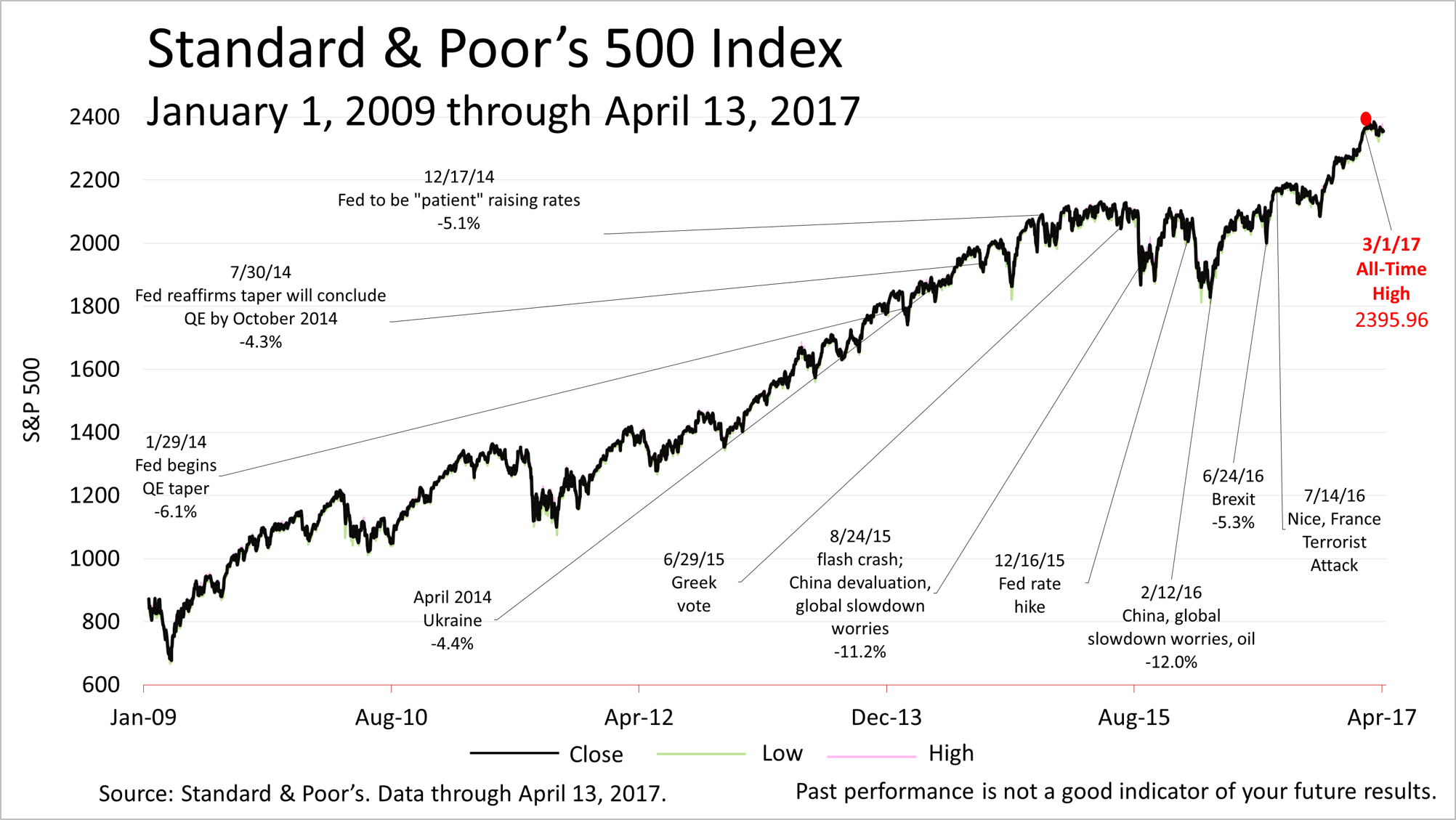 Stocks have had an amazing run for eight years. However, investor euphoria that followed the election, when the promise of a major tax cut set off a rally in stocks, has given way to worries about how to finance tax reform without increasing the nation's budget deficit. The U.S. effort to strike back at Syrian President Bashar al-Assad's brutal regime and escalating tensions over North Korea's effort to acquire transcontinental nuclear missiles are also adding to uncertainty. A correction of 10% or 15% could come at any time.

However, predicting the growth rate of the U.S. economy for this quarter or forecasting the next drop or surge in stock prices is a guessing game. Stocks could resume their rise. 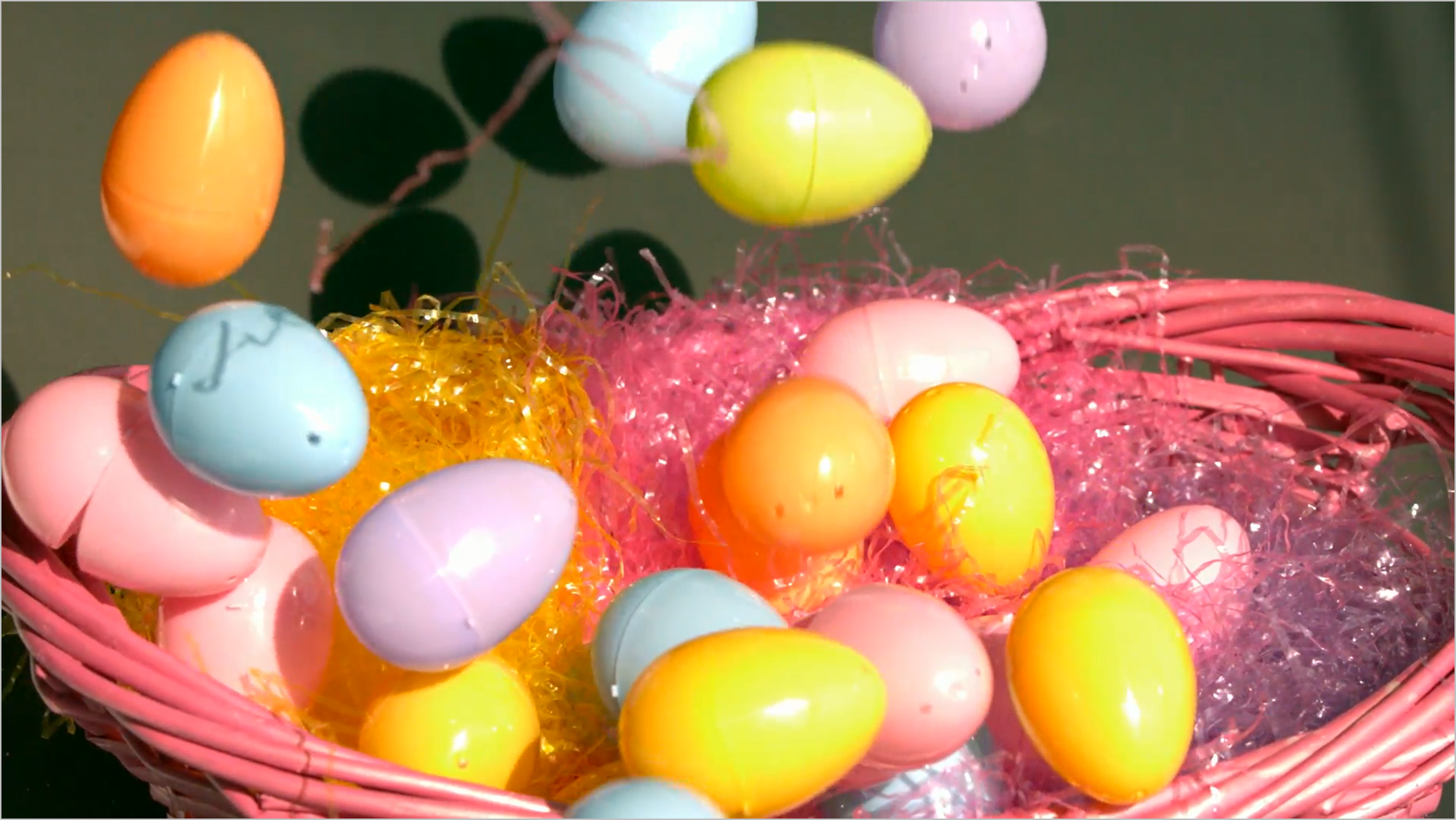 We're here to remind you not to approach investing like you're on a hunt for Easter eggs. Investing systematically and strategically based on a long term financial plan is a way of taking much of the guesswork out of funding your nest egg.

Have a wonderful holiday!